Can you make an egg?

When JoAnn was studying art at Eastern Washington College of Education, one of her instructors demonstrated how to make realistic shaped plaster eggs.  She applied this process to create a large 12" long plaster egg that she used as a model to form a mold over.  After removing the plaster egg she used the mold to cast a large blue resin egg with a figure inside.  This was described in my recent post, "Memories of an Art Exhibit" as part of one of the pieces on display.

I decided to include this process in my art work so here are the details.  You will need Plaster of Paris, a small neck container like a wine bottle and a medium sized rubber balloon.  Mix the plaster to the constancy of  medium thick gravy, then pour it into the container.  A plastic funnel makes this transfer much easier.  Now blow the balloon up to the size you want the egg to be and a slight bit more for lost air in the next steps.  Quickly slip the balloon over the neck of the container without loosing too much air.  Invert the container and transfer the plaster into the balloon.  Remove the container and tie off the neck of the balloon.  Gently rotate the balloon while tipping it back and forth so the ends also get coated.  This will take some time until the plaster sets up.  Try hold the balloon in the palms of your hands so as not to make indents with your finger tips.  When you detect the plaster has set and is no longer flowing inside the balloon, carefully set your project down and let it dry until the next day.  The balloon comes off easily if you pull out on the end you tied and start a cut in the rubber.  Usually it will tear itself open as it contracts, leaving a smooth white egg.

At this point the egg is quite sturdy if you have used enough plaster to build an 1/8 to 1/4 inch thick shell.  It will brake if you drop it however.  I chose to coat my egg with hardwood segments in a mosaic pattern and finish it as I have the vessels I make. 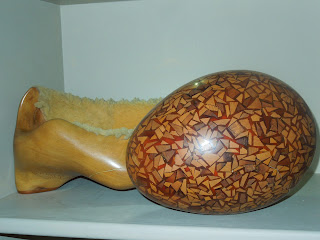 This project needed a stand to hold the egg while it was on display, so I fashioned a bulky, free-form stand with a recessed area lined with sheepskin, wool side out.  When placed in the "nest" as I refer to it, the egg snuggled down and I felt was secure enough  to go to an exhibit.  It would need a name so was christened, "Woodpecker Nest". 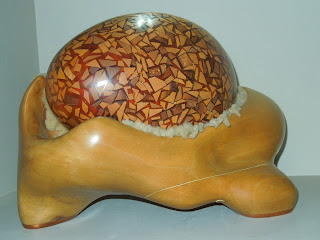 All went well as it traveled around to different exhibits and was stored in the various homes we moved to, but gradually I noticed some cracking occurring between wood segments.  I filled the cracks as shown here with red resin and refinished the entire egg with a clear finish that would seal moisture out and prevent further cracking.  Now Humpty Dumpty has age marks but no further problems have occurred.  If I had it to do over, I would fiberglass the plaster egg and then apply the wood over that, thus giving a fiberglass shell similar to the vessels I make.

I had fun making an egg.  You should try it sometime.
Posted by Unknown at 5:40 PM No comments:

The fragrance of Tennessee Red Cedar has always intrigued me as hard to mistake for any other wood with the exception of Juniper Cedar that grows in Montana.  You may have come in contact with the red cedar from Tennessee, used in hope chests or as closet lining.  The distinctive aroma comes from the oil in the wood and most bugs don't like it, so it prevents them from chewing on your clothing or important belongings.

I grew up in southeastern Montana where Juniper Cesar turned the bland countryside into interesting patches of dark green and sometimes a silver tree.  They tend to grow on the walls of canyons and provided a totally different atmosphere.  I can still imagine their evergreen fragrance on a hot day.  We used the dead limbs and trees for fire wood.  They were dragged up out of the canyon and taken home to our woodpile.  As I remember it now, some good sized logs were cut into firewood lengths and split into smaller pieces.  The Juniper Cedar aroma from the split wood was very similar to the Tennessee wood.  Some of the straight pieces were saved for fence posts that would last many years in the ground. I decided it was time to get these two woods together in one of my e/p vessels.  This vessel has a plastic lining (a tonic bottle) so it can be used to hold liquids. 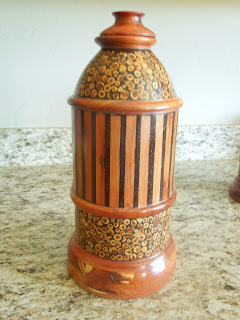 I made two of these vessels over plastic tonic water bottles, one the large 2 liter container and the other a smaller version.  Dimensions of each are as follows:  Large vessel 13.5" tall x 6.5" diameter,  small vessel  11" tall x 5" diameter.  The Tennessee Red Cedar wood was used in the base, central strips and rings as well as the top structure including the removable cap.  The sections of end grain pieces of small Montana Juniper Cedar limbs make up the remaining surface decoration.  In case you are wondering what e/p vessel stands for there is an earlier post that details this.  This last photo shows the relative size of these two vessels. 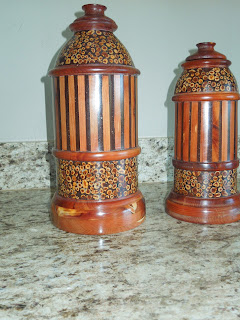 Black resin holds all the wood pieces in place.  After the surfaces were worked down and sanded smooth, an oil finish was rubbed on and when dry, paste wax was applied and buffed.
Posted by Unknown at 11:05 PM No comments:

( a snippet from my autobiography "Growing Up In The Country")

Our friend and my co-worker, Craig invited JoAnn and me to his home in Prescott for a week end.  He had a guest house where we could stay
that offered us all the privacy and comfort of a motel.  Craig suggested we stop at Arcosanti on our way to Prescott and tour that unusual architectural project.  It was just off the main highway a couple of miles.

The route to Prescott is through Phoenix and then north on highway 17, locally known as the Black Canyon Freeway.  Cordes Junction is 55 plus miles up the freeway where highway 69 takes off to the left for another 35 mile drive to Prescott.  To find Arcosanti we continued along side highway 17 another mile past the junction, following a dirt road, which soon turned to the right toward a significant canyon.  Arriving at the edge of the canyon an unusual collection of buildings came into view.  They were built on the crest and down into the canyon.

Arcosanti is an experimental community that began construction in 1970.
The architect, Paolo Soleri, used a concept he labeled as “arcology”, a combination of architecture and ecology.  He designed the community to demonstrate how urban conditions could be improved through architecture to lessen the negative impact on the environment.  The location of the project is on 25 acres of a huge 4,060 acre land preserve.  When we visited the project it was still considered a work in progress and I would guess still is.  It was designed for a population of 5,000 when finished.  The current number made up of students and volunteers fluctuates between 50 and 150 people.  A massive complex many times larger than the facility we visited, called Arcosanti 5000, was envisioned in his master plan.

The community is building slowly as funding and volunteer help becomes available.  The primary function so far had been education, with students coming from around the world, to study architecture and ecology in workshops and classes.  In addition to the funds raised by education, the students participate in the ongoing construction.  Tourist traffic of approximately 50,000 people per year also creates funds for the project.  Cultural performances are sometimes scheduled in the outdoor amphitheater which draws good sized crowds.  One of the staff I work with told me of a festival held at Arcosanti in 1978.  The large crowd parked their cars in an open, flat area close to the performance and during the festivities a grass fire started, ignited by the hot muffler of one car and quickly spread across the lot.  More than 300 cars were damaged or destroyed.  Unless insurance settled the clams, this may have been a costly festival for Arcosanti.

Some funding is generated through the sale of metal and ceramic bells that are designed, made and cast on site.  A small sales outlet and fabricating facility is also located in Scottsdale, at the headquarters of the Cosanti foundation and closer to a larger potential market.  We purchased a ceramic bell at the Arcosanti location.  Later we collected a bronze bell at the facility in Scottsdale.  Their design is distinctive.  They make a good souvenir while helping the community development. 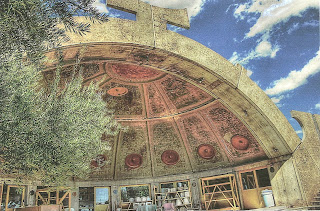 These large shell shaped structures were used as shop space to work on the bells.  I believe this one was where the ceramic bells were made.  The supplies are stored along the back wall in the white containers and the metal drying rack for the green ware is shown there also. 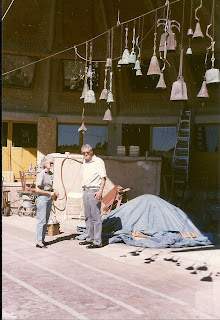 The five story structure housing the visitor’ center, cafe  gift shop and topped with a two bedroom “Sky Suite” available to overnight guests is the tallest point in the complex. 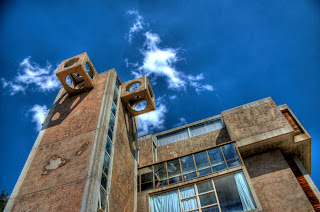 We had to leave for Prescott but vowed we would return when we had more time and possibly stay in that Sky Suite.
Posted by Unknown at 11:22 PM No comments: